The first Apex Challenge of 2015 welcomed its biggest ever number of teams as 105 groups spent six hours gathering Apex points at the Bramham Park estate in West Yorkshire.

Several new activities were waiting for the teams as they arrived on a warm and sunny Saturday afternoon. Among the challenges was a new caving bus, flood-lit archery and a chance for some of our most creative teams to film their own TV advert. 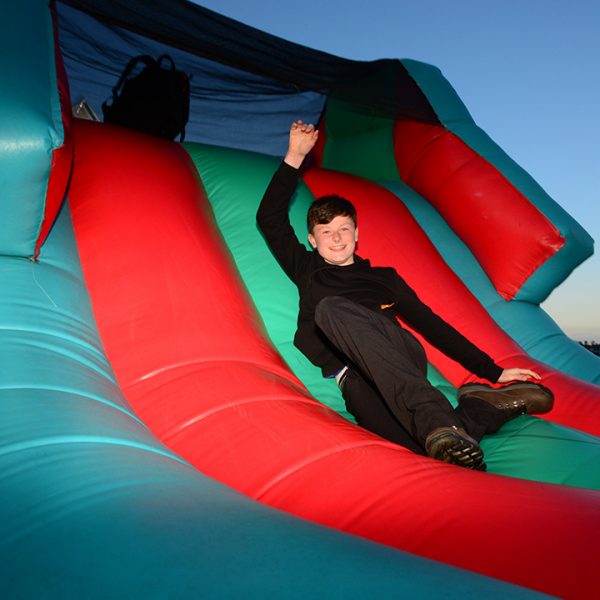 Isn’t it great to be back? We were determined for the Apex Challenge to return from its year off with a bang, so it was amazing to be able to hold our biggest ever event in such a spectacular location. A record-breaking 105 teams joined us at Bramham Park for this intense overnight adventure.

There was a real sense of excitement and anticipation on Saturday as the camping field began to fill with Explorers and Network members from right across the UK.

Teams were signing in with our new Apex hosts – using tablets and our wireless network to log them in and get them ready for their overnight challenge. As always the team names ranged from the bizarre to the ridiculous as Les Jizérables and Chick Chick Chick Spud boomed from the speaker towers to welcome the teams into the Apex community.

The event marquee was packed to capacity as everyone headed for the opening briefing. With videos, music, lighting and our personalised weather forecast from ITV’s Jon Mitchell, the scene was set for the overnight challenge.

Then, one by one, the teams set off.

Launching themselves first across the inflatable obstacle course to start the adventure, each team was then ready to start their adventure. With six hours to gather as many points as they could, this was going to be a tough ask. Points could be gained by tackling demanding activities such as open water canoeing, high ropes courses or archery challenges, but equally they could be lost if they were to be caught by the highly trained teams of Apex chasers.

Soon all 420 competitors were out and on the hunt for points. Teams were dangling from ropes high in the trees, racing wheelbarrows and tackling tough assault courses as their electronic tags started gathering those crucial points. Down at the lake, they were taking to the moonlit water to reach the punch, while over in the forest they were facing a room full of balloons.

Teams were also taking on the unique cave bus – a full size bus converted into a challenging underground adventure. It took nerves and bottle to tackle the pitch-black tunnels in order to succeed.

Steadily the points were building, but the chasers were also leaving their mark – taking points away from every team they caught.

All too soon, the six hours were coming to an end as teams started heading back to the marquee. After another trip over the assault course, it was time to see their animated map on the big screen, and watch how others had done. The atmosphere was fantastic – stories being shared and new Apex friends being made as the packed marquee filled further. No one got much sleep, but then who comes to Apex for a relaxing weekend?

As the sun rose, the competitors awoke to an amazing breakfast at the Apex Café. The smell of bacon wafted through the campsite – but everyone’s minds were on how they had done.

The marquee was even more packed than the night before as everyone crammed in to see how they had done. From those finishing at the bottom to the winners at the very top, everyone had achieved their best and were soon leaving with the personalised results booklets to prove it.

Once again our team of nearly 100 volunteers pulled off another stunningly brilliant event. Huge thanks to everyone who made it happen – and we can’t wait to see you again in October!

So what was happening out there? Here is a look at the 14 activity bases. How many did you get to?

Based on the Chicken Run film, teams had to solve an age old puzzle involving chickens, foxes and wheelbarrows but with a great Apex twist.

An open water canoe challenge is tough enough in daylight, but at night it took great nerve and teamwork to take to the water to gather the points.

Only those with a real head for heights could take on this high ropes challenge way up in the trees. Keeping wobbles to a minimum was the key!

D: CAVE ON THE GO

You wait hours for a bus, and then two come along at once. Not only that, one of them had been fully converted into a tough cave system. Good grovelling technique was needed to reach the punch hidden far inside the tunnels.

The challenge inside this plantation took teamwork, skill and agility as you had to work together to cross the obstacles and reach the 50 point prize.

It took great navigation to hone in on this small, lonely control point, but for those who found it, it was their easiest 50 points of the night!

This base saw the return of another classic Apex activity. Racing on a grass sledge down the steep hill was only the beginning, as those balloons also needed popping on the way down. Fast, furious and more than a little disorientating.

You had to reach for your inner Robin Hood at this archery challenge deep in the forest.

“Will you start the fans, please!” Inspired by the Crystal Dome, this challenge saw teams faced with a room full of balloons, but could their teammates guide them to the colours they needed to succeed.

If you have ever watched The Apprentice you will know that teams are often required to try their hand at making a TV advert. This base demanded exactly the same from our teams.

Possibly the toughest activity of the night, only enhanced by the amount of mud on the course. It was an army-style PT challenge where teamwork, physical strength and a sense of humour all helped teams to succeed.

One that required more thought than strength. A time to test the brain cells to avoid setting off the bomb – but not everything was as it seemed.

Lots of water, and lots of thinking needed to access the points at this base. Wet, messy and loads of fun.

This mysterious illuminated chapel in the woods was a fitting venue for a bizarre challenge involving glowsticks, bungee cord and a lot of high-pitched giggling.