69 joined us at Sherwood Pines Forest Park with the sun shining down for a weekend of challenge and adventure. 16 main activity bases were lurking in the darkness to test them to the limit as they competed for the honour of winning this now prestigious event. 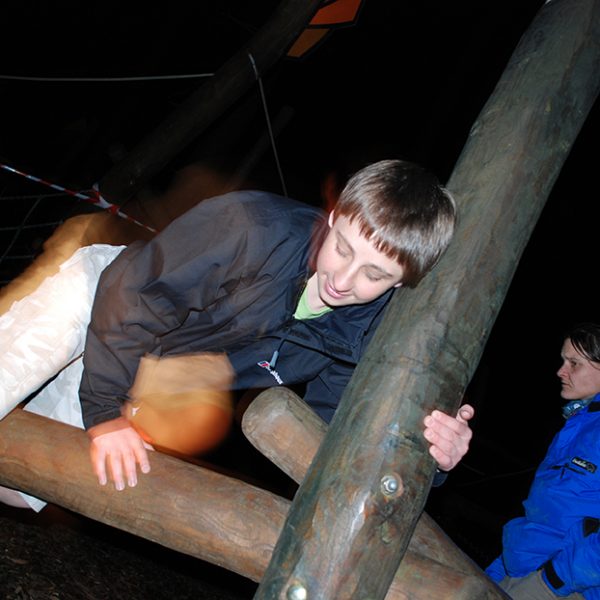 There was sunshine at Sherwood Pines Forest Park as 69 teams arrived for the 2009 Apex Overnight Challenge. Ahead of the them was a night of excitement and adventure and 16 top activity bases to try to find and complete.

This was the fourth time the event had visited that location and we were determined to make it the best ever. The park has almost everything we need for a perfect Apex event – dense forests, challenging woodland, open ground and an intricate network of paths – all that coupled with perfect camping areas. This year there was an unprecedented level of interest from groups across the UK. We had to close entries early, but could easily have had more than a hundred teams taking part!

There was a sense of anticipation in the air as all the Explorers and Network teams started pitching their tents in front of the Apex marquee. Maps were being checked, and routes devised as teams prepared for six hours out in the dark. After the event briefing, they were off.

We’d added some new activities this year to test the teams including Stealth Surveillance where teams had to use a night vision camera to track down the target in the dense undergrowth, and Ski Sunday where the teams had to take to the special Apex skis to tackle the tough cross-country course.

While finding their way between the controls and bases, teams also had to avoid our army of trained chasers – trying to track them down and take points away.

Other activities in the wood during the night included bouncy castle assault courses, climbing and abseiling challenges, mountain biking and even the messiest of all bases where most teams ended up covered in custard. It all added up to an action packed night in the forest.

As teams returned back from the darkness in the early hours of the morning the results system was kicking into action. The marquee’s big screen instantly displayed each team’s route. Already everyone was beginning to get an idea of how they’d done.

When morning came, and breakfast had been eaten, the results were announced with the top teams leaving clutching piles of top prizes. It had been another landmark event in this landmark location. We’ll surely be back to Sherwood very soon.

It was an energetic challenge on this inflatable assault course. Did your team have the stamina to cross the tunnels, slides and jumps to complete this blow-up task?

B: BURSTING FOR A WII

This may have been as simple as waving a white box around in front of the big screen but it needed great skill and judgement to complete the Wii challenge.

This adventure playground may have been built for kids, but with the Apex adaptations, it became a whole lot harder. Only the most physically able teams could complete the course to find their way to the crucial punch box.

This base was packed with technology in the woodland. Could your team use the stealth night vision cameras to track down your targets in the undergrowth?

Everyone loves a bouncy castle and this base was full of jumping mayhem. There were several wobbling challenges to complete in order to get the full 50 points.

Armed with a loaded air rifle you had to channel all your concentration on the task in hand. Your team needed steady nerves and full control to achieve your target here.

It’s Apex’s answer to those Go Ape ropes courses! You had to tackle a large route – high up in the trees – as the wobbling lines were the only way to reach the crucial electronic punch.

This one was quite simply about you going up in the world! The caving ladders were suspended from the railway bridge and the only way to reach your fifty point prize was to tackle the long strands of steel – and keep heading upwards!

Perhaps the messiest base of the competition! Did your team manage to navigate through the obstacles without your bowlful of custard dribbling down your face?

It’s a tough mountain bike course, in the dark! Not only did your team have to contend with the tough uneven tracks and the lack of light, but there were also extra challenges to thoroughly test your skills on two wheels.

You will have looked ridiculous doing it, but with so many balloons strapped to your conjoined team, could you control the giggling for long enough to make it through the dense undergrowth without popping any of your precious cargo?

You needed to find the engineering talent within your team to tackle this tough construction project. Steady hands and clever logic were needed to construct the archway using just the minimum of materials.

N: OFF THE RAILS

You’re on a derelict railway line and have to escape. But a tough and intriguing challenge stands in your way. Your
team had to tackle the obstacles at this trackside base to claim the fifty point reward.

Deep in the forest, the path heads off into the darkness – and down it you find this unique challenge to top up your score with another 50 points.

It’s the way people in the middle ages would defend their castles, but tonight this was your only way to defend your
chances of winning. The soggy sponges needed to be fired with accuracy and power to win this woodland challenge.

It’s adventure skiing but without the snow. Did your team have the suitable skills to negotiate the course while strapped to those special Apex skis?