Easily our biggest ever event – the Spring 2008 Overnight Challenge boasted a record 16 activity bases. After a year away the event returned to Sherwood Pines Forest Park on the weekend of 10th and 11th May.

56 teams spent six hours collecting points through the darkness of the woodland. The activities they tackled included the now legendary Apex lawnmower racing along with a high level ropes course, zipline and assault courses. The sun was also out for the warmest weekend of the year so far. 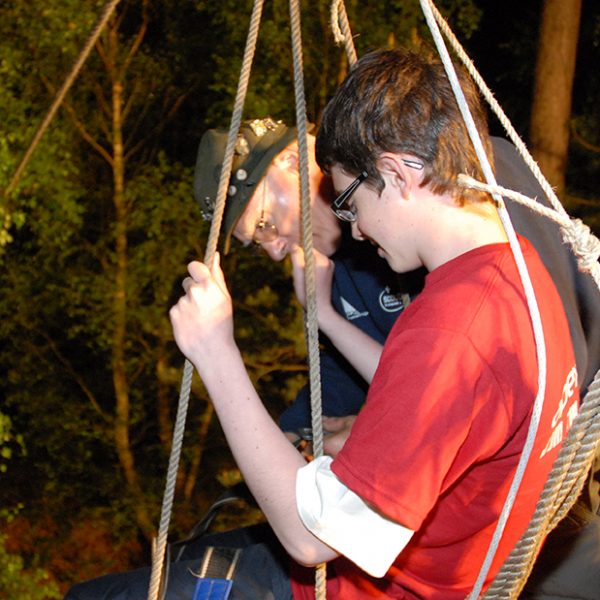 What a weekend! It was by far the hottest Apex Challenge event we’ve ever held – and that boiling weather was matched by a hot line up of great activities right through the night. From our highest ever rope bridge to our most musical base; this was a night packed with surprises.

As teams arrived at the spectacular Sherwood Pines Forest Park , the sun was shining and the mood was exciting. Teams began to receive their event packs and routes were being planned, as the sea of tents began to expand in front of the massive Apex marquee.

Soon it was time for all 56 teams to pack inside that marquee for the event briefing. A sea of red filled the space as everyone squeezed inside, proudly wearing their new Apex t-shirts. The main feature of the briefing was the first look at our brand new scoring system. The soggy control cards and plastic punches had been left in the Apex history books – now we had a totally digital microchip system. As all the new rules were explained, all the behind-the-scenes staff had their fingers securely crossed that this new technology would do what it should.

So as the sun began to set the teams started to leave for their night of adventure in the forest. Six hours to collect as many apex points as possible. Over at the bouncy castle base Explorers began flinging themselves through the suspended hoops, while further into the forest a complex electrical circuit was being devised to release the crucial punch.

Certainly the high point for many was our tallest ever rope bridge suspended way up in trees. It took a team captain with a lot of nerve and bottle to head up into the darkness. Elsewhere though driving skills were being put to the test at Mower Motors while it was skills on two wheels that needed to be shown for success at Blood, Sweat and Gears.

The disused railway bridges were the home for two other impressive bases – one involved scaling a wobbling wire ladder to reach the punch – the other led to an unnerving aerial runway back to the ground. Then there were the skills game – some with barrels, others with pancakes, but it seems one of the most popular was testing all the teams’ musical coordination. The sound of the Guitar Hero base could be heard from quite a way off as everyone put all their concentration into playing along with the rock classics!

So as the hours passed, the number of bases each team visited increased, as did the number of teams being caught by our fearless ‘catches’ – patrolling the tracks to steal those hard-earned points from those who failed to hide in time.

But soon the six hours were up and the marquee began to fill once again. Instantly everyone could see how they’d done and exactly where they went. Crowds were gathering round the big screen to compare the digital maps of each team. The soup and hotdogs were going down well, and steadily everyone headed off for a very well-earned rest.

Sunday seemed to be even hotter than Saturday. As the smell of bacon butties began to waft from the Apex Marquee, the results were being finalised and soon everyone was back in to hear exactly how they’d done. The computerised scoring system had worked perfectly and everyone’s personalised results had been running off the printer all night. Now it was time to find out where they’d come.

Soon all the prizes had been given out and teams were heading home with sleeping bags, rucksacks, vouchers and tents. Others were just heading home with memories of a great night out in the forest. It had been the hottest Apex on record – and the weather wasn’t bad either!

See you in October!

Your culinary skills were put to the test in this woodland kitchen. You need to model yourself on Jamie Oliver to cook the perfect pancake to help you get round the targets in the trees.

Everyone loves a bouncy castle and this base was full of jumping mayhem. There were several wobbling challenges to complete.

Did you prove to be the next Jimi Hendrix? It was one for the more musically-minded competitors as your guitar skills, and coordination, were put to the test on the big screen.

This adventure playground may have been built for kids, but with the Apex adaptations, it becomes a whole lot harder. Only the most physically able teams could complete the course to find their way to the crucial punch box.

Is that custard? Or is it jelly? Are those maggots? Or maybe they’re crickets? It took a brave and clear head to take this on. But teamwork was critical, if only to decide who would face the unknown contents at the Delve of Doom.

It’s a huge aerial runway through the forest. From scaling the towering platform, to strapping on and heading over the edge on the long ride down, this was definitely one for those with a head for heights!

You’ve got the battery and you’ve got the light, now you need to complete the circuit. But when it’s several hundred metres long, and weaving through the forest, did your team manage to find the right items to put in the right gaps to illuminate your way to the fifty points?

You’ve heard of the Go Ape ropes courses – well this is the Apex’s very own miniature version. It’s a rope course up in the trees – and the wobbling lines are the only way to reach the crucial electronic punch.

J: THICK AS A PLANK

It’s a classic logic puzzle used in military training the world over. Could your team work together to discover the best way to use the barrels and planks to complete this taxing challenge?

This one was quite simply about you going up in the world! The caving ladders were suspended from the railway bridge and the only way to reach your fifty point prize was to tackle the wobbling stands of metal – and keep heading upwards!

It’s a tough mountain bike course, in the dark! Not only did your team have to contend with the tough uneven tracks and the lack of light, but there were also extra challenges to thoroughly test your skills on two wheels.

It’s the way people in the middle ages would defend their castles, but tonight this was your only way to defend your chances of winning. The soggy sponges needed to be fired with accuracy and power to win this woodland challenge.

N: TOP OF THE POPS

This base was about being protective and gentle while still battling through the tough undergrowth of Sherwood. Did your team manage to get round the course without popping your crucial cargo of balloons?

P: OFF THE RAILS

You’re on a derelict railway line and have to escape. But a tough and intriguing challenge stands in your way. Your team had to tackle the obstacles at this trackside base to claim the fifty point reward.

It’s karaoke – Apex style. This base tested your vocals as well as your code cracking skills. Could your team decipher the song title and then suitably sing it back to receive the points?

The legendary Apex Lawnmower returns! This was one for all the best drivers in the teams. It was time to board the mower and tackle the driving course on this powered grass cutter, complete with its own private number plate!