The Apex Challenge returned to Sherwood Pines Forest Park on the weekend of 13th and 14th May 2006 – the same location it had used exactly 12 months before.

There were well over 60 teams at the overnight event with plenty for both newcomers and returning teams to enjoy. Many of our 14 main activity bases were completely new for this event. They included huge ziplines and virtual caving. 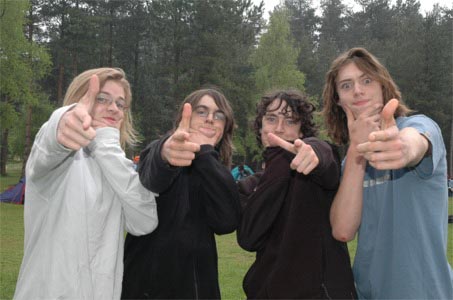 “It is the coolest thing I have ever done!” That’s just one of the comments we’ve had from the 63 teams who took place in the 2006 Apex Overnight Challenge event. 250 Explorers and Network members were battling through the night at 13 top activity bases, navigating between control points and crucially trying to avoid those ultra-keen Apex Chasers.

The line up of activities at this event was truly spectacular. The old favourites were back, including the bouncy castle gymnastics and the laser shooting, but there were also some new appearances.

The ‘Virtual Caving’ base proved very popular where teams had to scale a huge disused railway bridge on a caving ladder. But when they’d reached the control point at the top, the challenge still wasn’t over – as the other side had to be scaled in reverse. It was true adventure challenge which had everyone gripped.

Further down the track the mountain bikes were whizzing down dark tracks, lit only by a trail of glowsticks. A good sense of direction and stacks of nerve were the name of the game here. But elsewhere it was coordination and skill that was needed. The fairground side stall base had everyone knocking over coconuts and even hooking ducks in order to reach the crucial punch.

Then there was the odd base that was clearly not for the faint hearted. Screams could be heard for miles coming from the Unlucky dip base. With the keys you need for unlocking the punch hidden under all sorts of wriggly things, it took real bravery to fetch them out.

The canoeing challenge had the added excitement of a leaking boat! Teams had to paddle their way past large inflatable dolphins, then crawl along a wobbling pontoon to reach the punch. But even the experts were coming back more than a little damp!

But the best base award of the night went to the team who’d organised the ‘Zipline’. This massive aerial runway took a full day to construct. Teams had to scale a huge tower high in the woods to board the seat – then off they whizzed down the line to the bottom, way off down the hill. A great way to earn 50 points.

As teams arrived back in the early hours of the morning, the chilled out atmosphere of the marquee was a welcome sight. The catering team had been busy preparing hotdogs and drinks – while the results team were already starting to work out how teams had performed. As photos from the night were cycled on the big screen, teams slowly retired to get some well earned sleep, but very soon the sun was already beginning to rise.

As everyone woke up on Sunday morning, it was time to discover how everyone had fared. Did we let the chasers catch us too many times? Did we get to enough of the activities? All was about to be revealed at the results presentation.

Soon it became clear who was leaving with the top prizes – but everyone was happy just to have been involved in such a large-scale event. Everyone left with a full results pack detailing their routes and how they’d performed… and discussions could be heard about how game plans would be altered for next time!

And that next time is just five months away and will be the biggest event ever staged by the Apex Team. Make sure you register early for the Apex Extreme in October as demand will be very high for the places available. If you liked the Apex Overnight Challenge – you’ll love the Apex Extreme.

There was everything but the candy floss at this fairground-themed base. From the coconut shy to hooking those ducks. You needed a steady hand to gain enough points to release the punch.

This ropes course tested your head for heights as well as your balance and stamina. The whole team had to follow the wobbling route to get the 50 points.

Simply follow the rope trail to lead you to the punch. But it wasn’t as easy as it sounds. With tough and surprising challenges along the way, teamwork was critical to make the full distance.

It’s the highlight of every assault course, and this huge aerial runway wasn’t for the faint-hearted. The super fast journey down the hill will have led you to the 50 point prize – but only if all your team dared to be fully zipped.

The punch is securely locked away and your team needed to find the right key to open it. But with so many keys in such horrendous places, how many of you dared to plunge your hands into the buckets of doom to find the right one?

It was a case of taking to the water in the open canoe to get full points at this base. But with all of you in this wobbly craft it needed great skill and teamwork to successfully navigate around the pond. Did your team avoid going for a surprise swim?

You needed all your caving skills for this one – yet it was totally above ground. After successfully climbing high on the electron ladder it was a case of tackling the abseil to get back down. It’s caving but without the crawling and squeezing – sounds good to me!

Transport yourself back to the middle ages as your team attacks the fortress with your makeshift catapults. But the enemy won’t give in without a fight. Don’t get caught in the crossfire or you could get more than a little wet.

It was a case of blood, sweat and gears at this moonlit mountain-biking base. Your team had to tackle all the obstacles on this downhill route with just a line of glowsticks to follow.

Large-scale laser quest in the forest. It was a case of ducking and diving to avoid the lasers while still trying to achieve your team’s goal.

It was the winner of last year’s favourite base award and so the bouncy castle was back for more! But you had to overcome your team’s giddiness to complete the challenge on this ever-wobbling fortress of fun.

It’s like the shot-pot or the discus… but with more of a footwear theme. But as well as giving it as much welly as you could, your team also needed to exercise the brain at this challenge.

How could building a simple Lego model be so difficult? Well, with the instructions out of sight and just a couple of radios to help you out, did your team have the communication skills necessary to complete the challenge?

P – TREAT IN THE TREES

If you made it all the way down here there were 50 points just waiting for you. No tricky activity, no daft challenge – just punch your card and go. How generous are we?!