Sherwood Pines Forest Park was a new location for this event. The dense woodland and the difficulty of navigating in the darkness made this event a real challenge for those taking part.

Some new activity bases, most notably the bouncy castle hoops challenge were there alongside old favourites to challenge our teams. They had six hours to visit as many of the demanding activities as they could – but also had to watch out for teams of chasers who were trying to track them down and take points away. 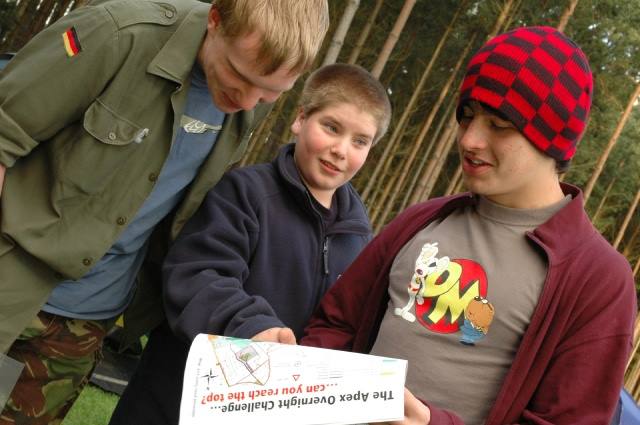 It was by far the biggest event the Apex Challenge team had ever organised. Here organiser Matt Richards looks back on the weekend of packed activity bases, over-enthusiastic chasers and capsized explorers…

It was when the catering team told me there were 700 rashers of bacon to cook on Sunday morning that it really hit home just how big this year’s Apex Overnight Challenge was. They had 350 bacon butties to make in just one hour to feed the masses who were part of this huge event. But they did it, and did it easily; just one of the successes that made up this biggest ever Apex Challenge.

It was fantastic to see so many teams arriving in the sunshine on Saturday night, literally from all over the UK. We had Explorers here from Nottinghamshire and right across Yorkshire, but teams also travelling up from Essex, down from Scotland and even flying in from the Isle of Man. 67 teams was a new Apex record and there was so much demand we even had another fifteen on the waiting list. Obviously the word was spreading and spreading very quickly.

As teams started checking their maps and planning their strategies, the start team were loading the computerised scoring system ready for the huge starting board to set the teams off in the staggered start. Meanwhile the forty-strong team who were running the bases were out stringing up rope bridges, blowing up bouncy castles, lighting up mountain bike trails, filling buckets with maggots and refuelling lawnmowers ready for the start of the event.

The packed event briefing gave all those taking part a final chance to understand the rules. The time was ticking before it was their turn to begin the challenge. Two teams a minute began leaving the marquee, their names being announced on the sound system – and yet again the humourists were out in force. As “Mike Roch” and “Tess Tickle” set off into the twilight, “I Can’t Believe We’re Not Better” were putting the final touches to their battle plan.

And so the teams were off enjoying the last hour or so of daylight before the darkness drew in and finding your way became all the more complex. The network of forest tracks, pine trees and not much else made navigation extremely difficult and with Apex Chasers waiting around many corners, there was no time for standing around.

Teams began flocking to the activities. Glowsticks lit the way along the rope bridge illuminating not only the wobbling lines, but also the swampy marsh lurking underneath. Of course there were several who ended up a little closer than they’d hoped to that mud pit. The glowsticks were also lighting the way at the mountain biking. Scores of teams taking the challenge through the weaving paths, across narrow bridges and tough jumps. Meanwhile others were facing their fears at the “Delve of Doom”. Here hands were disappearing into buckets of everything from spaghetti to sawdust to things far more wriggly. You could hear the screams for miles!

But it was uncontrollable giggling that could be heard on the way to the bouncy castle base, the winner of this year’s “best base” award. It was a case of getting all the team members through four hoops suspended above the castle. There was leaping, diving, somersaulting and even just hurling team members through these rings – and that was just the Network members. It’s true you just can’t grow out of bouncy castles!

Elsewhere teams were rescuing Land Rovers from ditches, doing laser-quest style shoot-em-up challenges, escaping from giant rope webs and defusing bombs, but my moment of the night came from the canoeing base. Here teams were faced with a lake and an open canoe. All four had to successfully paddle it round to four submerged barrels to complete the challenge. But one team didn’t quite make it. Their wobbling got a little out of control and these two girls and two boys ended up having an unscheduled swim. But despite being submerged in freezing water on a fairly cold night they were desperate to continue the Apex Challenge. So after a quick change of clothes and a hot drink, they were all back out collecting Apex points – a real example of the determination and ace attitude shown throughout the weekend.

That enthusiasm was also echoed by the teams of Apex Chasers. Their job was to lie in wait for teams, capture them and take points away. There were four pairs of chasers patrolling the event area, one pair it seems getting very much into the role. We heard reports of snares, smoke bombs, ambushes and trip wires as teams were captured. But not one complaint; this chasing element of the game was rated amongst the best bits of the competition.

By 2:00am teams of exhausted Explorers and knackered Network members began to arrive back at the start. Here they were greeted by not only a hot dog and hot drinks, but also a projected display of themselves at all the activity bases. Cheers erupted whenever their team appeared on the big screen. But before long, everyone was heading back to their tents for a well-earned rest.

Meanwhile the results team were springing into action. All the control cards were checked, the data entered into the event computers and the final leader board began to take shape. Then it was time to begin creating the individual booklets each member would be taking home. Everyone was to get a six page results booklet with their team’s details, a summary of their individual performance, a map showing the route they took, together with the full event results. 1608 pages needed to be printed. It was no wonder the results team didn’t see their sleeping bags until 6am!

Two hours later and everyone was waking up, ready to find out how they had done – and whether they would be leaving with any of the top prizes. This year we had LED torches, camp chairs, fleece gloves, tents and rucksacks to give away, together with days at a high-wire adventure course. But the star prize was a full parascending course, including six flights, but only one team would be winning that. Who would it be?

As we started to announce the results, all eyes were fixed on the scoreboard. It became clear how those points they’d lost for being caught or returning late had meant a lower place on the leader board. But equally teams were patting themselves on the back for pushing themselves to those extra controls when they could see how they were climbing the league.

With the prizes given out (including a much sort-after glowstick for all the top three teams) the rush to get the personalised results booklets began. But it soon became clear there was much less of a rush to leave. Teams lounged around enjoying the sunshine and recounting tales of their night at the Apex as they re-checked their route – now printed out before them to see how they could have done even better.

Meanwhile those of us in the 60 strong organising team were working out how we could tweak things for next time to make things bigger and better still – and if demand for the Apex continues to grow as it has been doing, just how many rashers of bacon we will be needing next time. May go and get some more frying pans I think.

A – CASTLE OF DOOM

It may be the closest base and the easiest to find, but locating the crucial base punch may not be so easy. It’s hidden away in a remote part of this adventure playground – so the team must search low, and more crucially high, to get the 50 points.

B – HEAD FOR HEIGHTS

Rope bridges – you either love ’em or hate ’em; either way each member of your team must cross this wobbling rope bridge to reach the punch. But with the marshy swamp lying right beneath you it could get messy.

A bomb’s been found in the middle of the forest and your team are the ones who need to stop it exploding. You must work together to move it to the safe container, but one false move and it could all be over.

You would have though a Land Rover would be ideal for this kind of terrain, but when it gets stuck in a rut, only you and your team mates are able to help out. Devise a way of hauling the tonnes of metal to safety.

This forest shoot-em-up game makes Laser Quest and Paintball look like they’re for your gran! With the added darkness, forest obstacles and hidden surprises it’ll take a good mind as well as a steady shot to succeed.

If you thought you’d be spending the night on dry land you’d be wrong. Here your team must take to the water in a canoe to complete the challenge, but try not to end up going for a swim.

Is it sawdust? Or building sand? Or is there something far more sinister lurking in the hidden buckets? Having the courage to bury your hands in these containers really separates the brave from the feeble.

The world famous Apex Challenge lawnmomwer driving base! But as always it’s not necessarily speed that pays off. Does your team have the skills to manoeuvre the mower around all the obstacles to reach the punch.

There’s been an almighty crash and you are the only ones who can help. Follow the clues and enter the spectacular crash site to find all there is to know and grab those 50 points.

You may not have been on one since you were five, but no one ever grows bored of bouncy castles. Here though you need to control the bouncing to tackle the challenge. It’s exhausting but hilarious.

It would have taken one hell of a spider to spin a web this size. Your team must make its way through it all without disturbing the balance or it could all go horribly wrong. Reach the end and the punch will be yours.700 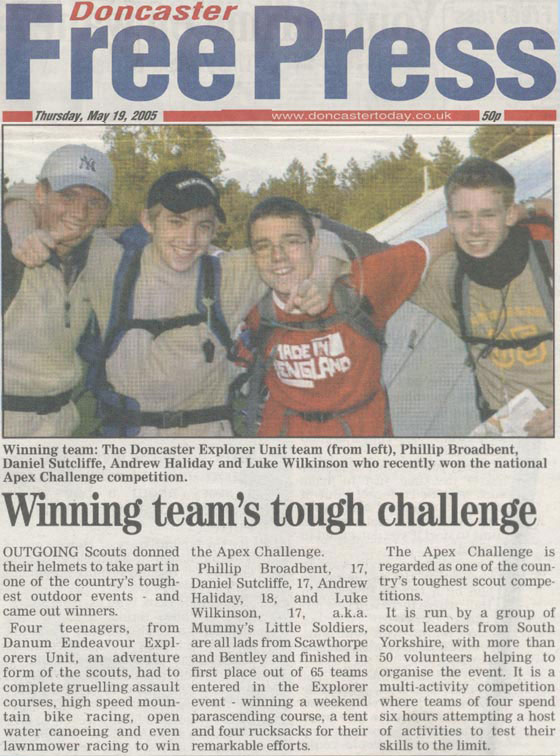