The Apex Challenge opened itself up to Scouts from right across the country as well as teams from Yorkshire and the North of England in Spring 2004.

Up until this event teams had been confined to Yorkshire and the surrounding area but now there were entries from much further afield. The 50 or so teams who took part enjoyed an event that featured challenges on water for the first time. 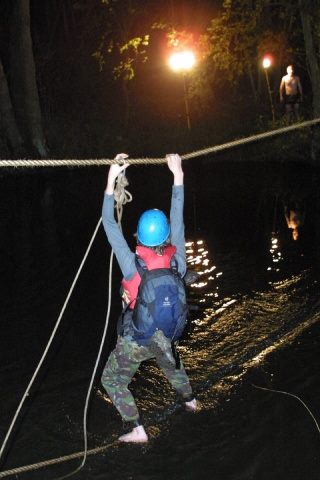 The 2004 Apex Overnight Challenge was easily the biggest and most impressive event we’ve organised yet. It was held in Wharncliffe, near Grenoside on the North side of Sheffield.

The weather forecast hadn’t been great (cloudy, drizzle and some heavy showers) but thankfully it wasn’t raining as fifty or so teams arrived at the start of the competition. With so many teams it took slightly longer than planned to register everyone and get the event briefing underway, but soon more than 200 Scouts were setting off across the “I’m A Celebrity, Get Me Out Of Here” style bridge into the darkness of Wharncliffe. The spectacular entrance was needed to transport everyone over the dry stone wall, otherwise it would have meant a long work around either end to start the challenge.

Many set off clutching well-planned strategies and routes around the playing area to try to get the most Apex points. It was still half-light as they set off so finding their way to the first activity bases wasn’t too difficult, but as the full darkness arrived, it was much more difficult to find the controls, even with glowsticks attached to them.

Most of the activity bases got busy fairly quickly and teams had to decide whether it was worth queuing up or going off to get some extra controls while they waited.

Teams carefully make their way across the minefield. One wrong move and the bombs will no longer be unexploded!

It looks like a proper bridge on the map, but your way across the River Don is far less straightforward. With the punch lying on the other bank, there’s no choice but to take the challenge.

The punch can only be released by burning through the rope holding it in the air. But with the candle on one side of the river and the matches on the other, teamwork is essential.

It’s all aboard the open canoe as your team takes to the water. Navigate between markers to succeed.

With the punch nestling high in the crag above you, the only choice is to rope up and start climbing.

It’s one for the tightrope walkers and gymnasts. Good balance and a steady head means success on this rope course.

A challenging course leads you to the punch. But it’s the whole team that needs to succeed, not just one member of it.

Grovel under, round, over and between the rocks to make your way to the fifty-point prize.

It’s fastest finger first as your general knowledge is tested to the limit at this interactive woodland quiz game.

It’s the traditional marble run, but ten times the size! Only the most organised teams will be able to co-ordinate all the parts so your ball finds the target.

Without no lawn in sight, your team takes to the mower to navigate the assault course, including a limbo challenge?

Most teams arrived back within the six hours allowed to avoid getting any time penalties, and most also managed to avoid the Apex Chasers who weren’t quite as quick as they could have been in catching teams to rob them of 20 points per time caught!

Warm soup and hot dogs awaited teams as they arrived back at the main marquee, exhausted, but having had a really good night. The work was just beginning for the results team who spent the next few hours putting all the results together.

Here are just some of the comments we got from teams taking part in the event.

“The event’s great value for what you get.”

“We feel honoured to take part in such an exceptionally well-run affair. It were tops.”