The Apex Challenge held its first Overnight Challenge in May 2003. It was held in Wharncliffe Woods and built on the success of the first event but with the added twist of being in complete darkness.

Teams were again welcomed from all across South, West and Central Yorkshire but this time it was open to both Explorer and Network Scouts. South Yorkshire’s teams dominated the league table of winners. The event included many activities that were similar to ones included in the first event, but made all the more difficult to complete with total darkness. Map reading by glowstick was definitely an acquired skill! 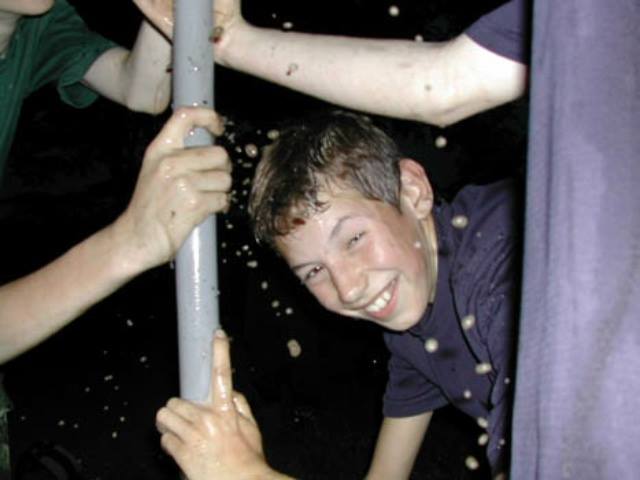 All six prizes in the first Apex Overnight Challenge went to South Yorkshire teams. The county dominated the event for the second year in succession.

It was last year’s third placed team, the ‘No Hopers’ from Hillsborough, who won the Explorer Competition with an impressive 520 points. ‘Mooooose’, from Sheffield’s Woodseats Unit, came top of the Network Competition with 645 points. Both winning teams managed to visit eight of the ten main activity bases.

Taking in teams from both the Network and Explorer age groups all across Central, South and West Yorkshire, the Apex Overnight Challenge 2003 was held in Wharncliffe Woods just outside Sheffield.

There were plenty of familiar faces from Scout groups who’d taken part in the first event the previous September, but also many new entrants who were trying out the Apex Challenge for the first time.

After registering the teams started putting up their tents on what was admittedly a fairly overgrown and uneven campsite! For most this was a fairly straightforward task, though some teams were left wondering whether their canvas would still be standing by the morning. Final details on how the event would work were given to the teams just ahead of the staggered start. And then it was off into the woods to collect as many Apex points as possible. Many of the entrants had used their free time before setting off to come up with very impressive detailed plans of the route they wanted to take to get the most points. Whether they’d stick to them was another matter.

The event was much larger than the first one. There were ten main activity bases…

Teams guided a blind-folded member through a pitch black maze to collect silver disks – but the only light they had – was on the head of the ‘blind’ player.

Over, round and under boulders on the craggy edge. Teams had to follow a course of glow sticks through some very tight squeezes to win the points.

Competitors had to climb a suspended rope using pulleys and guided knots to reach the punch suspended more than twenty feet above the ground.

A game of skill and judgement. A radio controlled boat had to be manoeuvred around a pond to gather balloons and then pop five of them against a spike.

A mental challenge to make your brain ache. Find the correct sequence of coloured shapes – but with each person having only some information, good communication was critical.

The team had to work together to get every member through a giant spider’s web – but if any of the glow sticks moved – it was back to the start for everyone.

A life-size version of the popular seaside game. One player was suspended by ropes above a huge bog, moved into position by their team-mates before being lowered to grab the punch.

A ball had to be floated out of a tube by pouring in water from the nearby pond – but with more holes than the teams had fingers it took some ingenuity to get the ball right to the top. Wet and very messy.

It was a case of crawling, shuffling and grovelling as team members tried various keys to unlock the punch at the end of a 40ft tunnel.

It was just like the Monaco Grand Prix as everyone got a chance to ride a sit-on lawnmower around a course. With limbo bars, a slalom section and a sprint finish, it took great skill to get the points.