The Apex Extreme once again travelled further North than it had ever been before in 2008 when it arrived in Langdale Forest on the North York Moors.

Close to Scarborough and Pickering, the area is dominated by forest and provided the 70 teams with exciting terrain to navigate through as they tried to be the ones to leave with the big prizes. With a slightly changed format there were new challenges and adventures devised for both Friday evening and Sunday as well as a new take on the now legendary Glow Challenge for Saturday night. 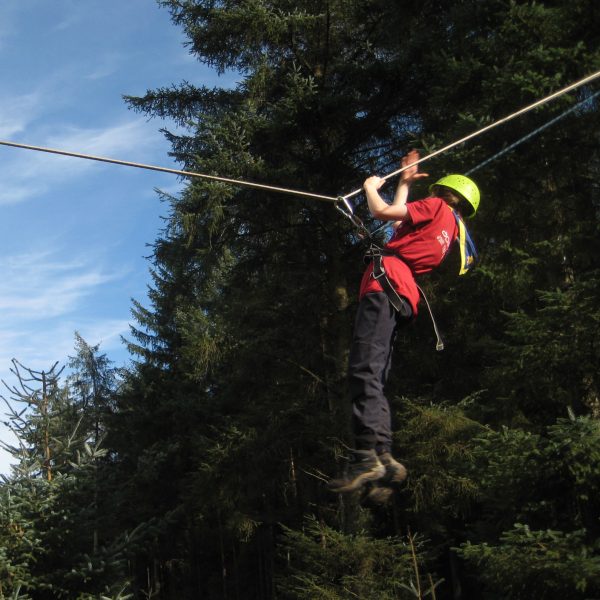 Our cameras were out capturing all the action right through the weekend.

And this video proves it!

Watch all the action from a brilliant weekend of adventure.

There was mud, mayhem, mountains and madness at this year’s Apex Extreme. It was an event which built on the Apex history to create a whole new format.

While it’s always important people know roughly what to expect from an Apex event, this year we were keen to introduce some new elements to the Apex Extreme. We had spent the previous months devising new activities, new formats and new challenges – but this weekend it would all be put to the test.

It was our most Northerly location ever, but it seemed no-one was put off by the remote location on the edge of the North York Moors. We’d found a great new Scout site from which to base the event and Birch Hall proved to be ideal. So as teams began to arrive from across the country the stage was set in the Langdale Forest for this major three-day event to test teamwork, agility and skill.

Tents were being put up in the camping areas while teams began to compose their strategies. Then everyone crammed into our shiny new Apex Marquee for the briefing. The format for the weekend was explained and everyone was preparing for what was to come. But was there a rest to be had before it all began? Oh no – the Apex Intense was just about to begin.

Teams had just ninety minutes to collect as many points as possible in this mini, sprint version of our legendary Apex Overnight Challenge. As the automated control system started to set teams off, the usual ‘creative’ team names started to be announced – echoing around the Langdale Forest.

It was a mad rush for points as the fresh and eager teams scrambled to find controls in the darkness – from those hanging precariously above a misleadingly steep mud slope, to those tucked away under footbridges – a fair run from the centre. But soon teams were returning, banking those well-earned points to keep them safe from the Apex chasers who’d been doing all they could to track these competitors down. As the ninety minutes drew to an end, everyone returned. Teams headed to get some rest, ready to then face Saturday’s Main Event.

After breakfast, the enthusiastic Explorers and Network members began heading off into the immense Langdale Forest for their seven-hour adventure. There were a total of 14 main activity bases to test nerve, agility and teamwork – as well as many more control points hidden in the woods, stretching the team’s navigational skills.
From challenges involving radio-controlled boats, to those catapulting eggs, and others racing lawnmowers – the area soon filled with shouts of excitement, encouragement and fear. Many team members were having to face their fears at an unfeasibly high ropes course, while others were finding themselves caked in mud on the riverside scramble course. But the points were all adding up and event leader board was taking shape.

As the evening drew in, teams returned to Birch Hall, where the Apex Café was open for business. This year we’d responded to requests for a more ‘toned down’ Saturday evening so held an informal briefing and followed that up with the glow grab challenge. A simple – but highly visual and entertaining way for teams to top up their overall score.

Sunday brought us more fine weather and ideal conditions for the event finale – The Sunday Scramble. This was designed to test every element of the team’s skill – from the observational skills finding the somewhat bizarre out-of-place items, to the logic and navigation puzzle of tracking down the individual colour codes at the Apex Accumulator. Then it was off to meet the army for the Final Assault. This was as planned a truly exhausting challenge, led for us by the Yorkshire Regiment which made sure every last bit of energy was consumed. There were more than a few red faces and collapsing legs by the end of all that.

It was then time for our new fully automated scoring system to swing into action – totalling the scores from all of the weekend’s elements. Soon the leader board was finalised and the prizes and trophies were given out to rapturous applause.

It was another great event – A new area, which added a whole new dimension to the Apex Extreme.

It was your chance to be a speedboat driver – but in miniature. These micro racing boats needed to be successfully navigated through the waterfall pond to secure your fifty points.

This took great strength and nerve. Which member of your team was nominated to tackle the ‘dead man’s crawl’ over to the crucial punch?

Here the control punch was locked in a box and the key was in a floating ball in a pipe. Water had to be poured in to bring it to the top – but with holes all around, did your team have enough fingers to stop the leaks?

It was a barrel-load of fun! Your team had to navigate across the tretcherous ravine with your barrel in order to succeed.

It’s where the two biggest rivers in the area meet, and this challenge took some lateral thinking as well as great teamwork in order to complete this waterside challenge without getting wet.

There was eggcellent fun to be had at this eggciting base! Catapults were firing dozens of eggs ova to your apron-clad teammates to catch in their special helmet-bowls. It was enough to make you crack up.

The legendary Apex lawnmower was back for another outing, but this time it had been refurbished with some balloon-popping spears. Your team needed supurb driving skills to navigate the balloon-popping course.

It’s a brain-teasing challenge in a cow field. Could your team successfully work out how to navigate through the course without getting blown up?

It was the highest ever Apex Challenge ropes course. First a ladder, then scaling the tree, then pulling up on a rope and finally you were high enough to take on the monkey bridge over to the punch.

The obstacle course looked challenging enough as it was, but when all your team was tied tgether at the ankles, this became a real test of teamwork and nerve. The final scramble net through the river was a fitting finale!

There was no way of leaving this base with a clean t-shirt! Water had to be carried up this muddy, slippy slope to release the punch.

Sit back, relax and enjoy the ride! This was our fastest ever aerial runway through the steepest part of the spectacular Langdale Forest.

It was something the RSPCA would have been proud of. You had to rescue the three little ducks from the shark infested pool. But were you careful enough not to damage their delicate plumage?