We travelled to the world famous Ilkley Moor for the second Apex Extreme. It was our most northerly location yet and attracted record levels of interest on the weekend of 12th – 14th October 2007.

60 teams competed for the prizes and took part in a packed weekend of activities and adventure include the return of the glowstick challenge plus new activities on the Saturday evening and Sunday. 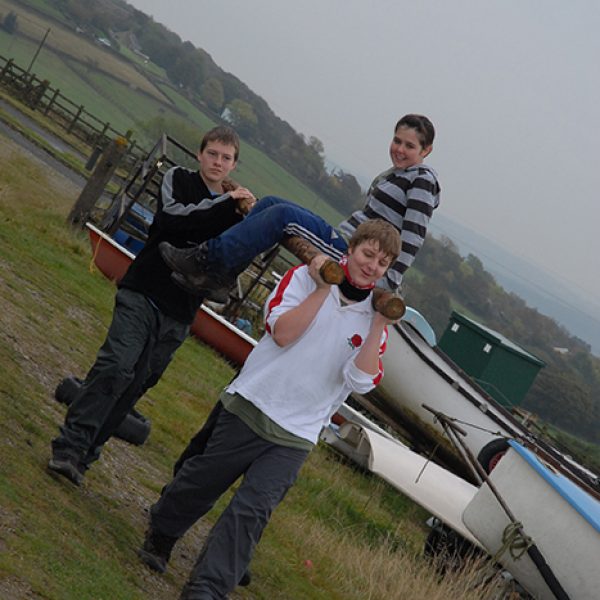 The 2007 Apex Extreme was caught on camera by our film crew Kevin Keane and Philip Norton. They spent the entire weekend capturing some of the events magic moments and putting them together into a souvenir DVD.

They had to work late into the night on both evenings to edit together the 13 minute minute recording of highlights which was then shown at the Awards and Results Presentation on Sunday afternoon. It shows teams canoeing, climbing, solving mental problems and just generally trying to collect as many Apex points as they could.

It was our only Apex event in the centenary year. It was in a brand new area and we had far more teams wanting to take part than before. The 2007 Apex Extreme had to live up to its name. And it did. A full weekend of action and adventure which stretched everyone to the limit.

As the teams began to arrive on Friday night, the area was all set for the weekend’s adventures. The computerised scoring system had been upgraded and our biggest ever team of helpers was ready to pull off a spectacular weekend.

The camping field at the Sconce centre was slowly filling with an excited buzz from the competitors as teams began to plan their strategies in anticipation for the weekend ahead. Some had travelled just a few miles from West Yorkshire, others were pulling up after a drive of several hours from the South coast.

As everyone packed into the marquee, the event briefing detailed what would happen during the weekend and when. But a few surprises were held back. This was to be a weekend of evolving adventure, as more secrets and extra adventures became clearer throughout the two days.
The teams all had their maps, control cards and instructions, but they still needed a start time. The now legendary Glow Company Challenge returned to decide which teams would go off in pole position.

As the glowsticks started flying, those with the nets began catching. This certainly wasn’t a game for the timid, but it looked spectacular! Soon the teams were racing back to the event centre. Their nets of glowsticks were swapped for a start time.

The main event began the following morning with computerised announcements echoing around the event centre setting the teams off. The Apex Extreme had properly begun.

Teams had seven hours to get as many points as possible. Visiting control points in remote places would give a welcome boost to the total, but the big points were for completing the challenging activities. A total of twelve were spread across Ilkley Moor – each requiring a different skill, and testing whether these Explorer and Network members really could work successfully as a team.

Within just a few minutes the activity bases were in full swing. Teams were tentatively wobbling on top of milk crates to reach the punch at one riverside base, while at another there were screams of exhilaration as they were racing down a zip line through a spectacular quarry.

As always, the rock climbing and abseiling proved popular. Even though there were more than a couple of worried expressions as those feet stepped over the crag edge for the first time.

The more bizarre activities including a fancy dress run through a stone circle which prompted bemused looks from passers-by. The waterslide down the dam wall needed a lot of co-ordination. As with many parts of the Apex Challenge, it was only the most daring who were successful.

Further across the moor, eggs were being catapulted over open ground, and it took a steady hand and lateral thinking to construct towers that didn’t collapse.

Throughout the seven hours many teams were following their pre-planned routes, trying to maximise their score. But that was about the change. Soon the sound of text message alerts could be heard across the moor. New control points were being revealed, and so teams had to alter their strategies to take advantage of these new mega-point opportunities.

As the seven hours came to an end, a stream of teams began arriving back at Apex HQ. Some steadily walked, with time for sightseeing with several minutes to spare. Others were faced with a lengthy sprint back to the event centre, everyone desperate not to lose any of their hard-earned Apex points by having time penalties deducted.

After a welcome bite to eat, the weekend of adventure continued, and soon everyone was back in the marquee for their second briefing. The plan for Sunday was being revealed; an intense session in the Apex Adventure Zone. But before that it was the Saturday Night Out.

It was essentially a tactical wide game, but on a massive scale. This stage of the competition was all about strategy. It was about stealth and evasion, but also cunning and speed. Those who did best worked as a team to gain their crucial balloons and avoid capture. Those who were losing out, were failing to think things through. This was the stage that separated the average competitors, from those who were truly in with a chance of winning.

After all the balloon buying and selling, all the chasing, all the hiding, and all the day’s adventures, it was time to relax by the campfire and reflect on the day’s event. That night many new friends were made, and many ideas were exchanged, but everyone still had their thoughts on what was still to come.

Sunday dawned, and as the mist cleared over Reva Reservoir, the scale of the adventure zone became clear. The army was unpacking a rotating climbing wall and mountain bike assault course, the huge inflatables were being blown up, and the open water was being filled with rowing boats ready for the adventures to begin. With each team having just 90 minutes in the zone, speed was the name of the game. It was about completing as many action-packed activities as possible. It’s fair to say few left without getting soaked. But everyone was still smiling.

As exhausted teams arrived back at Event Centre, the Apex software collated the results. The leader board was drawn up, the individual routes were plotted, and the score sheets printed. With a packed marquee it was time to join together one final time for the results. The tension was clear as the top teams vied for positions.

But soon, all the great prizes had been given out, and the Apex trophies were in the hands of the winning teams. After another hugely successful event the challenge is now on to beat all that in 2008.

With harnesses and helmets at the ready, it was time to hit the crags. Your team had to scale the challenging rock climbs in this impressive quarry to reach the crucial punch.

When you’re teetering on the crag top and the punch is far below, the only way to reach it is to abseil down the sheer drop. Did your teammates have the necessary nerves of steel to take those first steps over the edge.

This was your chance to be a plumber, engineer and gardener all in one! The network of hoses had to be connected together in the right way for the flow of water to release the punch. But you had to beware – there may have been a soaking on the way if you got it wrong!

Perhaps the most remote of all today’s activity bases. But this moody and peaceful stone circle certainly wasn’t a place for a rest. Your team needed loads of energy reserves to complete this energetic challenge.

It was probably a base you heard before you saw! Finally your team will have discovered what all the pyrotechnics had been about. Were your teammates able to complete this explosive challenge?

It’s an activity base dedicated to the man who was the youngest Briton to climb Everest and has since led a life full of adventure. Now’s the time to take on some of his type of challenges and see if you are a ‘Born Survivor’ too!

This was one for the Ray Meers fans. Could you go back to basics and create flames from nothing to launch the fireworks?

It was enough to make you crack up. This was a messy but very egg-citing activity base. Hurling the eggs ova to your team mates.

A wet equivalent to H. But did enough of the water avoid hitting you and enough get to where it needed to be to give you the 50 points?

It’s a wobbling tower of milk crates but were you able to work as a team to gain enough height to reach the punch high in the trees?

It’s like Jenga only far more complicated. This was one which needed all of your brain power. How did the towers fit together to get to the necessary height?

Sit back, relax and enjoy the ride! This was our biggest ever zip line through a spectacular quarry.