Our first ever Apex Extreme took place in October 2006. The main feature of it was the standard Apex Challenge event with an extra hour for teams to collect points by completing activities and visiting other control points.

To keep teams busy throughout the weekend loads of new elements were added for them to top up their scores including a glowstick challenge, a balloon race and a grand finale. 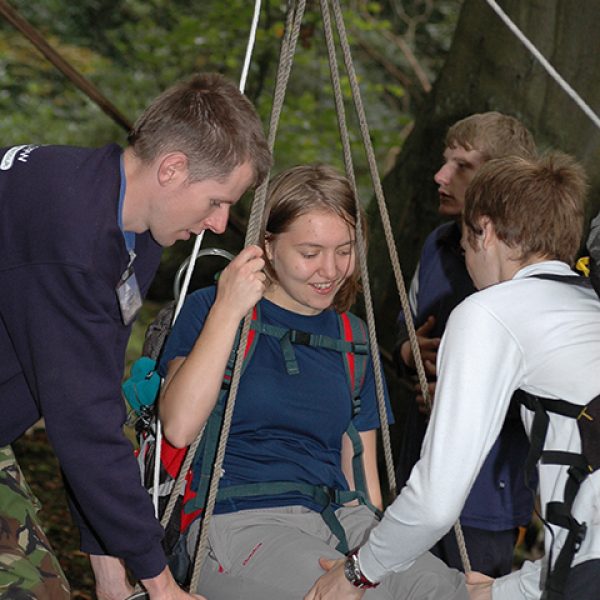 Not only were 150 young people battling through the tough challenges at the first ever Apex Extreme event, three teams also found themselves caught up in a real life rescue. Matt Richards takes a look back at this wild adventure weekend in the Peak District…

It was always going to be a huge challenge – not just for the 41 teams competing but also for all of us on the organising team. We’d spent the last few months negotiating with farmers, booking radios, writing scoring programmes, ordering more food than you can imagine, and generally trying to borrow as much kit as we could for as little cash as we could. This event had to be good – our first ever Apex Extreme event needed to live up to its name.

Friday evening came, and the teams began to arrive at the Apex Event Centre. You could feel the anticipation as they got the first details of what the weekend would bring. Tents began to spring up under the enormous glow of the lighting tower. Maps were being checked, plans were being formulated, and strategies were being finalised.

At eleven o’clock we had our first event briefing. The event centre was packed to bursting with teams, eager to find out more about the competition. Then just as they thought it was over, the first event began – the Glowcompany challenge.This online company had sponsored our competition by giving us 300 of the ever-popular glowsticks. So we devised a way to use them – and it looked incredible.

The recipe was simple. Just get those three hundred glowsticks, add 41 team members with fishing nets, tell everyone else to hurl the glowsticks into the nets, turn off all the lights, and stand back! You could hear the hilarity from miles away as those nets slowly began to fill. It was chaos – but that chaos was determining the crucial start order for the next day.

Saturday dawned bright and clear. It was perfect Apex Challenge weather as all the teams began their seven-hour challenge towards Kinder Scout. Amongst the 12 activities to complete was a dramatic abseil down one of Kinder’s biggest outcrops, crossing a river on a rope chair, and even trying your hand at extreme kite flying. Teams were also taking on a tunnel of gushing water at one of the bases, and when they reached the top of Grindslow Knoll, were faced with a blindfolded weaselling challenge. It certainly wasn’t easy.

By mid afternoon there were strange beeping sounds coming from pockets and rucksacks throughout the area. The Apex text message was coming through – guiding teams to the location of the ‘secret finish’. There was just enough time to gather those few more Apex points, before teams were heading to the meeting point.

But it is at this point that three teams ended up being faced with a totally different kind of challenge. They had heard the screams of a man who had broken his leg on one of the main paths up to Kinder Scout and immediately went to help.

Amongst these Explorer teams were three lifeguards and a trainee mountain leader so they had no problem looking after him. As they were in a mobile phone black spot, it was our radio communications team who were able to raise the alarm and call the Mountain Rescue team. When they arrived on the scene, they had nothing but praise for our Explorers whose treatment of the casualty was, in their words, “top-notch!”

Our three teams were then able to continue on their way – joining all the others now heading off the hill towards the finish.

The pork pies and Swiss rolls were certainly a welcome sight after seven hours on the hills – but straight away the teams were finding out about the next challenge. As the sun set and the night drew in, the Apex Extreme Balloon Race began.

Starting with four balloons per team, everyone knew they needed to stay intact to get the points at the end. But with Apex Poppers and other teams out to deflate those plans – a tactical approach was crucial.

As teams approached each of the balloon shops, it was clear they were facing a dilemma. Should they risk spending some of their hard earned points on getting more balloons, or could all those well-planned strategies end in a bang just around the corner?

By now teams were becoming more spread out. While the first teams returned to the Event Centre in little over an hour – it was close to midnight by the time we’d picked up the stragglers wandering off Mam Tor. But were they shuffling their feet and looking miserable? Not at all – even after 14 hours in the Peak, they were still loving every minute.

After such a demanding day, it was no surprise that there was a rush into the food hall. Masses of potatoes and all the toppings were being handed out to the hungry teams. After all, the energy levels had to be maintained for Sunday’s main event.

There were certainly a few aching legs and strange walking styles to be seen on Sunday morning – the pace of the weekend was already taking its toll. But there was to be no hanging around, as everyone was immediately briefed on the final event.

Straight away, teams were being whisked away in the minibuses to secret locations – while others were getting to tackle the Apex Challenge assault course. It needed strength, agility, teamwork and stamina to keep going round this mammoth route. They were running head on into tunnels, scramble nets, climbing walls, ladders and a dead man’s crawl. But all the time, the clock was ticking.

Over at the canoe pond, the boats were on a constant move. Everyone was needing to keep their head, and their balance, to stay in the boat. Only one of our teams went for an unscheduled swim!

By the time teams were returning, the results table was taking shape. It was becoming clear who was heading to the top of the leader board.

At 3:15 we started our final presentation with a look at the event video. It was seven minutes of pure brilliance. Kevin and Phil had created a masterpiece in no time at all, reflecting all of the adventure and excitement of the weekend.

As the results were revealed, the cheers continued. Some were leaving with the top prizes, but it seems everyone was leaving with the satisfaction of making it through such a tough and challenging weekend. I think that’s certainly extreme enough for me. See you next year!

In case you missed any of them, below’s a breakdown of all the activity bases that were on offer in Saturday’s main event…

It’s one of the highest crags in the area and your job was to take to the ropes to head straight down it. It took a bit of skill and a lot of nerve to make those first steps over the edge.

This climbing challenge tested your head for heights as well as your balance and stamina. But with the Tor being tucked away below the path – it also took some intricate navigation to find it.

As Crowden Brook comes crashing down off the Kinder Plateau, you’re faced with a loud and ominous waterfall. Did your team manage to forget about getting soaked in order to reach your 50 points?

It’s one of Channel 4’s top shows and now you’ve got a whole activity challenge based on the series. But without Jack and Kate, it was your team who are the castaways – needing to work together for success.

This may have been one of the highest and most exposed bases, but where you were heading was much more enclosed. Grovelling through the chasms and holes would have been hard enough – but when blindfolded, it meant your team-mates were your only chance of getting back out.

This code cracking base made Da Vinci’s effort look like a walk in the park. It took real teamwork and logical thinking to work out the code and release the punch.

You had to cross the minefield to reach your 50 point prize. But with unexploded bombs all around it meant your team had to use all your cunning and skill to complete the course without being blown to bits.

This windswept hilltop was the ideal spot for a bit of kite flying. The trouble was that it had to be built first. Would the Wright Brothers have been proud of your flying machine?

A trip to this base at the side of Crowden Brook meant you had almost made it to the ‘secret’ finish point. But this surprising challenge lay before you. It needed nothing but total success to get the 50 points.

While one of you got to sit back and relax – the others were working to pull them across this dramatic ravine on your ‘floating’ seat. Could you work out the logic of the ropes to get your team-mate across to the crucial punch?

For many, this was your first challenge of the day – but tackling this widest part of the river certainly didn’t make for an easy start. With the water crashing over the weir below, were your team able to keep concentration for long enough to succeed?

It’s wet, it’s dark and the smoke machine certainly isn’t helping! Here your team were faced with a river tunnel that was never going to be easy. It took guts and nerve to complete this watery challenge.