We gave away more prizes at this event than ever before. Karrimor sponsored the event and donated enough rucksacks for the top three teams in both the Explorer and Network competitions to win them.

With 15 fantastic activity bases, there was much more on offer for team to tackle than ever before. From the life-size Sudoku task to the traditional lawn mower racing and the brand new air rifle shooting, this was an event packed with excitement and adrenaline. 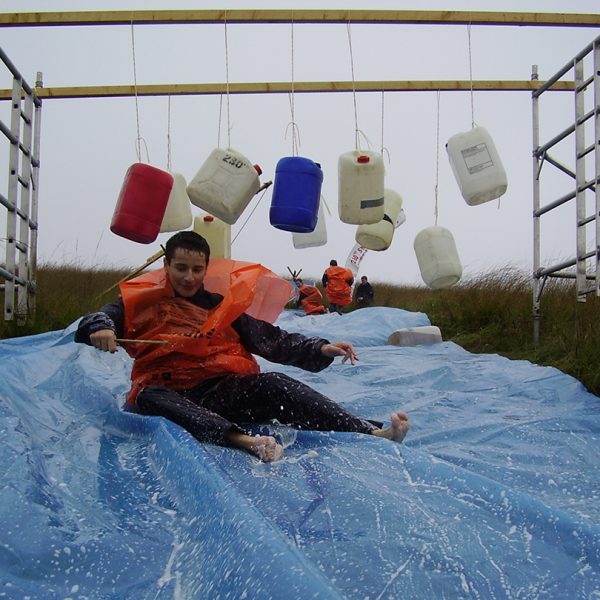 The bad weather did its best to wash out the 2005 Apex Daytime Challenge, but as organiser Matt Richards reports, it didn’t succeed thanks to the determination of all those taking part…

It was hard to believe but this was our seventh Apex Challenge. Six events before it and not once had we had a problem with the weather. Every time it had been perfect. So surely our time was due, and it came on Saturday 15th September, and the rain didn’t stop for the entire day.

But did this cause a washout? Were teams dragging their soggy selves back to the marquee after just a couple of hours? Not at all! The wettest ever Apex Challenge was also one of our best ever. It may have had more rain, but this event also had more activities, more distance to travel and more determination than ever before.

As teams started arriving, the rain was at full pelt. Explorers and Network members were sprinting into the marquee looking as if they’d already spent a weekend in a monsoon, but so far had only had to tackle the run from the car.

Maps were being studied, and the information booklets were being scrutinised as the 41 teams began to plan their winning strategies. As the time for the event briefing drew closer it became clear several teams had failed to arrive. Not being able to face the rain is clearly the first hurdle on the Apex and one those pathetic teams had failed to clear!

As always the briefing gave everyone a final chance to understand the rules but also to see which of the fantastic prizes they’d like to be heading home with. The Mountain Rescue Team were also on hand to offer advice for staying safe in this adverse weather. “Keep going and keep smiling” seemed to be the general gist of it and that’s advice it seems almost everyone stuck to.

The computerised starting system was soon in action firing teams off into the mist and rain every thirty seconds. From outside the marquee you could see small crowds of four heading off in every direction. It would be six hours before most would be seen by us again.

Straight away though the activities were getting underway. There were fifteen of them this year – a new Apex record. Crucially there were many new activities and most with more of a wow factor then before.

The rain failed to hamper the rock climbing and abseiling activities where the competitors were hurling themselves down Curbar Edge, then scrabbling their way back up the slabs of Froggatt to reach their punches.

The skill games proved popular, whether shuffling an egg down a series of drainpipes, firing a rocket 60 feet up into the air or manoeuvring a radio controlled Land Rover through a demanding course. Other bases had them putting up tents blindfolded and completing taxing mind games.

But it was the wet ones which proved most popular. Many of the competitors said they loved catapulting water bombs at their teammate at the ‘Pair of Wangers’ base while others were getting a little wetter than they’d hoped for at the open water canoeing.

Our base organisers from the emergency services had again hit gold with their activity where the teams had to tackle real fire fighting gear to blast a high-powered jet of water across the valley towards the punch. They even got to wear the yellow helmets!

But winner of this year’s best base was the giant water slide, ‘Conquest’. A huge plastic sheet covered in water, foam, and bubbles, which the teams had to race up and slide back down collecting flags as they went. Huge swinging obstacles were also knocking them off their feet. It was wet and wild, but then on a day like this, so was the whole competition.

As teams began to arrive back to the lure of the Apex barbeque, it soon became clear entering the results was to prove a little traumatic. Most of the control cards had become a ball of blue mush. Waterproof cards are now on the top of the list for next year.

Some teams came back early with most more or less on time, but it was great to hear the huge cheer for the four guys from “Maltesers” as they stormed back to the tent more than two hours later than planned and still smiling.

As everyone began to dry out and continued stuffing their faces with burgers and hot dogs, the results were coming together and the finale was about to begin.

As the results were announced, every team got a cheer whether coming last or first in the Network event, or in any of the 35 positions for the Explorers. Those who finished in the top five were awarded their prizes but everyone was happy with their own achievement.

Soon the results booklets were being handed out, everyone leaving with their own copy of the leader board, a breakdown of their team’s performance and a map showing where they went. It soon became clear how missing the odd control, or going that extra mile had impacted on their score.

So as the teams headed off into the dark (and yes, it was still raining), the organisers began assessing the event. It had been the first wet one we’d had – constant rain for eight hours was quite an achievement but the impact it’d had on the event was almost non-existent. Yes, everyone was wet, and yes it had made it tough, but the event had continued without a hitch and with even more laughing and smiling than usual. The rain can darken the skies, but it can’t wash out the Apex Challenge.

See all the photos from the event …and the full results.

It will have taken a lot to crack this base, but yolking aside, you needed to make sure you didn’t get too egg-cited as the eggs were rolled through tubes on the tricky course. There were no egg-scuses for fowl play!

You needed to build a high-powered rocket to fire that crucial punch to your team mates. It was as much about quality of design as the ability to aim and fire.

Nestled in the bottom of this field were two giant catapults. Your team had to successfully ‘wang’ the bombs on target to gain control of the punch.

Your team had to follow the rope course as it twisted and turned through the rocks with several surprises along the way. Only when the challenge was complete could you stand back and admire the staggering cliff top view.

It was a test of all your driving skills, but in miniature. The super-fast radio controlled cars needed to be driven with speed and precision.

The laser challenge needed fast footing and a steady hand to shoot on target. This was laser quest at its most wild! Not only did it need the eye of a sharp-shooter, it needed the defensive techniques to not be caught out yourself.

Precision and technique was the name of the game when you got hold of these air rifles.

The only way was up! With the punch at the top, and you at the bottom, the only way to get it was to start climbing!

This was one to fully test your waterproofs! This game of conquering summits and defeating perilous peaks wasn’t for those scared of getting wet. The base location right next to the river should have given something away!

The only way to the punch was to take to the water in an open canoe and try to reach all the clues.

It’s a puzzling craze that’s got the whole country in a spin, but this larger than life version aimed to test much more than your 1-9 numbering skills.

It was on the steepest slope in the area but the challenge which lurked amongst the trees, bracken and brambles tested much more than your grip and stamina.

Another wet one provided by our crew from the emergency services! Your team had to blast the powerful force of water across to the target to reach your target. The ‘volunteer’ who did the punching, no doubt also got the soaking!

Don’t look down was this one’s motto. They say it’s the start which is the tricky bit, but at this abseil that was the only way to reach your points.

This woodland challenge would have been hard enough if you had 20/20 vision, but when the blindfolds it was suddenly much more difficult.