At every event we present a special award to a team which takes part in a particularly inspiring way. This is awarded in memory of a great man who inspired the Apex Challenge, John C Hall.

John was a dedicated leader who guided the Apex Challenge team as the event was being developed. He had been a leader in the Sheffield area for decades, and was always known for championing the underdog, striving for success in the face of adversity and always doing it with a smile. It is these qualities we look for when awarding this prestigious prize.

Dixie Normous stepped in when they saw a member of another team who had been left behind by her own team members. She was on her own and upset and they made friends with her and helped her so that she could enjoy the rest of the event even if this meant they sacrificed their own chances of finishing higher up the leaderboard. They thought of someone else first rather than themselves and were deserving winners of the JCH Award.

Barney's Buddies entirely sum up the very best attitude of teams who come to the Apex Challenge. They would normally be challenging for much higher places on the leaderboard but sacrificed their own chances of a better placing to support one of their team members who has recently been in hospital was determined to compete as best she could. They took things easier, travelled more slowly and put her enjoyment first and they are worthy winners of the JCH Award.

When they saw another team injured on the first stage of the event, Frozen and Chill stopped to help and ended up carrying someone back to base at their own expense. They finished the event stage 50 minutes late and lost around 300 points. But they showed great team spirit and were still smiling and were worthy winners of the JCH Award.

This team from Halifax Sea Scouts impressed us with how they took time out of their event to help a member of the Apex chasing team.

The chasers are out trying to steal points from teams but when one of them fell over and hurt his shoulder this team went back and helped him up and got him to first aid. A huge thank you and well done to them.

Autumn 2015 event: The Return Of The Doran's Darlings

This is a team that has impressed us for years. This was their EIGHTH Apex Challenge, and every year they do better and better. Each of the team members have their own skills and talents, led by charismataic Sam. This year he took part with his mum, sister and a friend who was new to the Apex Challenge and they had their best ever performance.

Always a team to try everything, keep going and push themselves to the very limit, we think The Return of Doran's Darlings sums up exactly what the JCH Award is all about.

The JCH Award for our spring 2015 award was awarded to Dumbledore's Army for a random act of kindness which put themselves at a disadvantage for most of the event so that they could help out another team in need. 2 Aidans And An Outcast managed to lose two of their torches within the first half hour of the competition. On seeing Dumbledore's Army they shouted for help and the team of girls offered to loan them a torch for the rest of the evening. On returning to Event Centre 2 Aidans And An Outcast nominated the other team for this award and we decided this was the best nomination that we received and was very much in the spirit of why the JCH Award was set up.

This year the October event had a military theme as all the competitors took part in Apex Special Ops. This team did it with huge enthusiasm and great humour throughout. Complete with dog on a lead and an inflatable fifth member, they made sure all five of them took part in every stage of the competition, including the tough assault course, and storming the enemy fort. Although they got plenty of funny looks from the locals, we felt The Famous Five really summed up the fun of the event, and so we were pleased to award them this prestigious prize.

At this event the JCH award was presented to a team who weren't even taking part in the competition, but were deserving winners of the award and all it stands for. Our Apex Special Projects team have built and organised many great elements for Apex Challenge events over the years including huge assault courses and bridges but this year they went even further and created the spectacular Apex Mountain which provided a really challenging and exhilarating start and finish for the competition. Most of the team had to learn scaffolding from scratch, had spent months planning it and more than 12 consecutive hours building the structure at the event. The team's perseverance, positive attitude and enthusiasm despite a few setbacks was inspirational and so they were very worthy winners of the JCH award.

The JCH award at our tenth anniversary event went to a team who arrived in style! While most teams got lifts from willing Scout leaders, or were dropped off by their mums, these students thought more laterally. Between them they left their three different universities, used at least seven buses, three trains and another bus to arrive at Longshaw, enthusiastically getting off the bus with "Is this Apex?". They had made it with ten minutes to spare. The Network team then competed with great enthusiasm, friendliness and style throughout the weekend, making them worthy winners of the JCH Award.

These lads, from Anvil ESU in South Yorkshire, impressed us by the way they combined their bizarre outfits with a great attitude towards the competition. Always smiling and having a laugh, they could regularly be seen waddling in character around the event site and even finished in a very respectable 37th place!

Autumn 2011 event: The Bandits Are Back

These Explorers from Hornsea summed up to us what teamwork was really all about. While members of their team had abilities and challenges in different areas, they worked incredibly well together, building on the best of each of their strengths throughout the event. This was always done with a huge smile on their faces, and we'll forgive them for their bizarre tutu outfits!

This team's impressive costumes must have taken weeks of planning. But not only did they have a dramatic collection of themed props, they also had exactly the right attitude for competing at an Apex event. While keeping all the other teams entertained in their medieval ways, they still managed to finish in an impressive third place in the Network competition.

It's certainly a brave way to take part in a tough adventure event, but these three Smurfs from Tame Valley Explorers in Greater Manchester managed to stay in character thoughout the weekend - and even managed to come third in the competition! It was not only their brave choice of outfit (or lack of it) which secured them the award, but their positive attitude and cameraderie throughout the event. They even made sure they had cleaned away all the blue paint from the showers too! 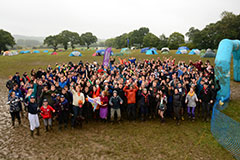 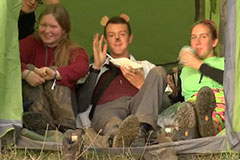